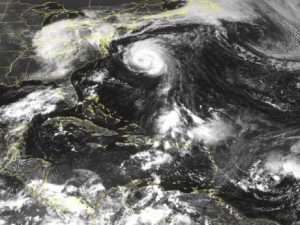 (CMC) – The Caribbean’s response to disasters during this year’s expected “above average” Atlantic hurricane season is being significantly enhanced with a humanitarian ship on standby in the region’s waters, fully equipped to support countries impacted by weather events and other disasters.

Executive Director of the Caribbean Disaster Emergency Management Agency (CDEMA), Elizabeth Riley, disclosed today that the vessel will be launched through Global Support and Development (GSD) – a non-governmental rapid disaster response and humanitarian organisation based in Amsterdam.

She said for the first time, GSD is providing the region with assistance in strengthening its disaster readiness.

“As a part of the GSD’s disaster preparedness and response initiative, it will permanently post an 80-metre humanitarian vessel in the Caribbean region,” she announced at CDEMA’s annual press conference for the 2022 Atlantic hurricane season.

The ship, M/V Dawn, will be a platform for disaster preparedness and response initiatives, with capabilities designed to meet the needs of communities across the region.

“The vessel…is a purpose-built and self-sufficient ship which will ensure timely and high-quality support to any impacted state without cost to countries in the Caribbean,” Riley said.

“This state-of-the-art vessel is equipped with an operation centre, an onboard medical facility with a dedicated cold storage laboratory, and a desalination plant with the capability to produce up to 70,000 litres of fresh water.

“The vessel can also undertake marine survey and salvage operations and allows for the conducting of helideck operations, including aircraft refuelling and underslung load cargo as well.”

As for CDEMA’s preparations, Riley said the agency carried out disaster response training exercises in the organisation’s member states to examine their national plans, ensure those plans are adequate, and identify areas that need to be strengthened ahead of an event.

CDEMA also held its flagship Exercise SYNERGY on May 22, which focused on a regional response to a multi-hazard, multi-island impact.

Additionally, Riley said CDEMA has upgraded its internal telecommunications infrastructure with new HF transceivers, noting that communication is usually one of the first areas impacted by hazards.

The United States-based National Oceanic and Atmospheric Administration (NOAA) is predicting activity will be “above average” during the June 1 to November 30 Atlantic hurricane season this year.

It has forecast that there will be between 14 and 21 named storms, with six to 10 likely to become hurricanes, including three to six major hurricanes, which are hurricanes of at least Category 3 strength.

Colorado State University has put out similar predictions. It has forecast 19 named storms, nine of which will become hurricanes with four of those strengthening into Category 3 systems at the least.

Riley added that experts predict a 60 per cent chance of major hurricanes making landfall in the Caribbean during the 2022 Atlantic hurricane season.

However, she stressed, “it takes only one event to have a significant impact and hurricane preparedness is absolutely critical”.

The CDEMA executive director reminded that while today’s press conference coincided with the start of the hurricane season, the region is susceptible to a wide range of hazards, including earthquakes, for which residents and governments needed to be prepared.