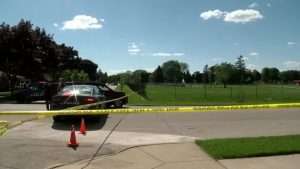 (AFP)— A shooter wounded multiple people during a funeral in the US state of Wisconsin on Thursday, police and local media said.

“At 2:26pm there were multiple shots fired at Graceland Cemetery. There are victims but unknown how many at this time. The scene is still active and being investigated,” the Racine Police Department said on Twitter.

Local media reported that five people were wounded at the funeral, which was for Da’Shontay L. King Sr, a man who was killed by police in March.

Gun violence-plagued America is reeling from two devastating mass shootings last month: one at a Texas elementary school that killed 21 people, and another at a New York State supermarket that left 10 dead.