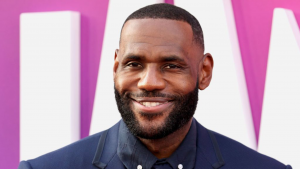 After another monster year of earnings–totaling $121.2 million last year–Forbes estimates that James has officially become a billionaire, while still playing hoops.

The 37-year-old superstar has a net worth of $1 billion, by Forbes’ count. James, who’s missing the playoffs for just the fourth time in 19 seasons, is the first active NBA player to make the billionaires list. (Michael Jordan, the only other basketball billionaire, didn’t hit ten figures until 2014, more than a decade after he retired, thanks to a well-timed investment in the Charlotte Hornets basketball team.)

“It’s my biggest milestone,” James told GQ in a prophetic 2014 interview. “Obviously. I want to maximize my business. And if I happen to get it, if I happen to be a billion-dollar athlete, ho. Hip hip hooray! Oh, my God, I’m gonna be excited.”

James has done just that–maximized his business, to the tune of more than $1.2 billion in pretax earnings. He has commanded more than $385 million in salary from the Cleveland Cavaliers, Miami Heat and Los Angeles Lakers as the NBA’s highest-paid active player. Off the court, he has raked in upwards of $900 million in income from endorsements and other business ventures.

Born to a struggling, 16-year-old single mother in Akron, Ohio, James lived with an assortment of family members, friends, neighbors and his peewee football coach–moving a dozen times in three years–before becoming the most hyped high school basketball prospect of all time. He inked his first deal with Nike in 2003, at age 18, famously rejecting offers from Reebok and Adidas in favor of what he saw as the better long-term partner. Good call. After more than a decade of success, he struck a lifetime agreement with Nike in late 2015 that pays him tens of millions annually. Last year, thanks to Nike, plus deals with brands like AT&T, PepsiCo and Walmart, he was the second-highest-earning athlete in the world.

But the real key to James’ billion-dollar fortune: He’s been more than just a pitchman. James has long structured deals to give him equity in brands he partners with, giving him a cut of the upside instead of a quick paycheck. In 2015, James walked away from an endorsement agreement with McDonald’s, worth an estimated $15 million over four years, to instead gamble on the fast-growing Blaze Pizza chain, where he’s an investor. He’s taken equity in brands like smart gym-maker Tonal and rideshare giant Lyft as well.

Named for the Akron, Ohio, apartment complex where James and his mother finally found stability, SpringHill combined three companies into one: James’ Robot Company marketing agency, athlete platform Uninterrupted and SpringHill Entertainment, founded in 2007 as a production vehicle for the award-winning documentary about James’ high school years, More Than A Game.

In 2020, James and Carter rolled everything into The SpringHill Company after raising $100 million from backers including James’ investment advisor Paul Wachter and Elisabeth Murdoch, the daughter of News Corp billionaire Rupert Murdoch. Last October, James sold a “significant minority stake” at a $725 million valuation to a handful of investors, including RedBird Capital Partners, Fenway Sports Group, Nike and Epic Games. James is the company’s largest single shareholder, although his stake is believed not to exceed 50%.

SpringHill, which helped produce 2021’s Space Jam: A New Legacy–starring James–and a recent Netflix docuseries about tennis star Naomi Osaka, is currently working on a biopic about James’ early days and a remake of the 1990 comedy House Party, slated to hit HBO Max in July.

James has publicly dreamed about one day owning an NBA team. He’s well on his way. The basketball star already counts pro baseball, soccer and hockey teams among his holdings.

James grabbed a minority stake in Liverpool F.C., the English Premier League soccer team, in 2011, when his sports marketing business entered into a partnership with Fenway Sports Group. Last year, he and Maverick Carter exchanged their stakes in Liverpool for a part ownership of FSG.

James is estimated to own around 1% of the group, which owns the Boston Red Sox, Fenway Park and Liverpool, plus half of Roush Fenway Racing and 80% of the New England Sports Network. In late 2021, FSG agreed to pay about $900 million to add the NHL’s Pittsburgh Penguins to its portfolio.

James has lived like a billionaire for years. He owns at least three properties, worth about $80 million in all. He built a $10 million mansion near his hometown of Akron, Ohio. He bought an 8-bedroom spread in Los Angeles’ tony Brentwood neighborhood in 2017 for $23 million. His latest splurge: a 13,000-square-foot Beverly Hills mansion. James paid $36.75 million for the 1930s hilltop home, which he has already torn down to replace with a mansion of his own.

James has been all-in on Blaze Pizza for years, even working behind the counter and hitting the streets to hand out pies to promote the brand. His enthusiasm is understandable. He reportedly paid less than $1 million for a 10% slice of the made-to-order, assembly-line-style pizza chain in 2012; it’s since grown to more than 300 company-owned and franchised stores throughout the U.S. and Canada. Forbes estimates James’ stake in the chain–plus his small cut of 18 Blaze franchise stores in Florida and Illinois that are run by restaurateur Larry Levy–to be worth about $30 million.

It’s expensive to live like LeBron, but even after accounting for managers, agents, lawyers and a superstar’s spending habits, Forbes still believes James has more than a half-billion dollars in net assets beyond what’s listed above. This includes proceeds from major scores, like the $3 billion sale of Beats by Dre to Apple in 2014 (James was a spokesperson and owned a small sliver) and shares of publicly traded fitness company Beachbody, which acquired Ladder, the sports nutrition company James cofounded with Arnold Schwarzenegger, in 2020 for $28 million in stock.