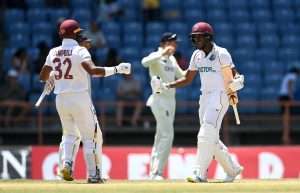 (CMC) – West Indies will welcome Bangladesh, India and New Zealand for an assortment of Tests, One-Day Internationals and T20 Internationals, highlighting a frantic summer schedule for the hosts.

Bangladesh will tour the region from June 16 to July 16 for two Tests, three ODIs and three T20Is, followed by India who will feature in three ODIs and five T20Is from July 23 to August 7 – with two T20s carded for the United States.

New Zealand will then clash with West Indies in a three-match T20I and ODI series from August 10-21, to round out 30 match days of cricket across three months.

“We are delighted to announce the match schedule for the men’s international calendar at home for the rest of the year,” said Cricket West Indies chief executive, Johnny Grave.

“We know our supporters will be delighted with the news that the matches are being played all across the region as well as those living in the USA will be able to see their favourite players in action.

“This is the busiest year of cricket ever in the West Indies. In January we hosted Ireland and England in white ball formats, and also successfully staged the ICC Under-19 Men’s Cricket World Cup 2022, which featured 16 teams traversing the region.

“We also witnessed the Apex Test Series, against England, which West Indies won in great style and with real fight.”

He continued: “The upcoming summer is expected to feature 30 days of top-quality entertainment for our fans as we look ahead to hosting three teams of differing styles in all three formats, which will be sure to whet the appetite.

“We are mindful that COVID-19 is still present, and we again want to thank the various Governments and other stakeholders who have worked with us to ensure the matches will be played in a safe environment.”

Bangladesh will arrive in the Caribbean later this month and take on West Indies in Tests in Antigua and St Lucia from June 16-28, before clashing in the first two T20 Internationals at Windsor Park in Dominica on July 2 and 3, the venue hosting international cricket for the first time in five years since the damage wreaked by Hurricanes Irma and Maria.

The final T20I is scheduled for July 7 at the Guyana National Stadium which will also host all three ODIs from July 10-16.

Powerhouses India then play three ODIs at Queen’s Park Oval in Trinidad from July 22-27 before crowning the Brian Lara Stadium with its first ever men’s international when the opening T20I is staged there on July 29.

Warner Park in St Kitts and the Central Broward Regional Park Stadium in Florida will split the remaining four T20s.

West Indies’ long summer will wind up when they face the Black Caps in three T20s from August 10-14 at Sabina Park in Jamaica, followed by three ODIs under lights at Kensington Oval in Barbados from August 17-21.

All nine ODIs form part of the ICC Super League, the qualifier for next year’s World Cup in India.