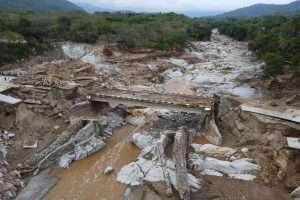 (AFP)— The strongest hurricane on record to hit Mexico’s Pacific coast in May left at least 11 people dead and 22 missing after triggering landslides and destroying homes, officials said Wednesday.

Authorities were struggling to reach remote mountain communities worst affected by Hurricane Agatha, after rockfalls and mudslides cut off roads.

“I embrace the relatives of those who have lost their lives,” President Andres Manuel Lopez Obrador said at his daily news conference.

“I hope that we find those who have disappeared when all the communities can be reached,” he added.

On Wednesday 22 people remained missing and the death toll stood at 11, the governor of the southern state of Oaxaca, Alejandro Murat, told reporters.

Earlier Murat had reported 33 people missing, but he later clarified that the number included those killed.

In the small community of Puente Copalita in the municipality of Huatulco, residents whose homes were badly damaged or destroyed recounted fleeing before they could gather their belongings.

“When we were told to leave, we wanted to take something but we couldn’t,” said Emilia Rios, whose wooden home with a metal roof was swept away by the storm.

“I didn’t take a single plate, a cup, a change of clothes. Not even sheets or towels. Nothing,” she said.

A helicopter was on stand-by to fly to isolated communities when weather conditions allow, officials said.

Troops were deployed to the region — one of the poorest in Mexico — to clear roads.

Two children lost their lives in the municipality of San Pedro Pochutla, which felt the full force of the storm, Mayor Saymi Pineda told Milenio television.

The affected families “did not want to leave their homes for fear of losing everything” but after hours of strong wind and heavy rain “they lost almost everything,” she said.

Agatha was the first hurricane of the Pacific season and unusually powerful for the time of year.

The storm was the strongest to make landfall along Mexico’s Pacific coast in May since record keeping began in 1949, according to the US National Hurricane Center (NHC).

Agatha barrelled ashore near Puerto Angel in Oaxaca as a Category Two hurricane — the second lowest on a scale of five — with winds of 165 kilometres (105 miles) per hour.

The storm weakened as it moved inland after lashing coastal tourist towns, but its remnants continued to bring downpours to parts of southern Mexico.

The country’s meteorological service sees an 80 percent chance that in five days the remnants of Agatha will head out into the Atlantic with the potential for another storm formation.

Mexico is regularly lashed by tropical storms on both its Pacific and Atlantic coasts, generally between the months of May and November.

The deadliest storm to hit Mexico last year was a Category 3 hurricane called Grace that killed 11 people in the eastern states of Veracruz and Puebla in August.

In October 1997, Hurricane Pauline hit the country’s Pacific coast as a Category 4 storm, leaving more than 200 dead, with Oaxaca and neighbouring Guerrero state the worst hit.