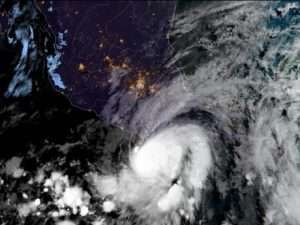 (AP) — Hurricane Agatha made history as the strongest hurricane ever recorded to come ashore in May during the eastern Pacific hurricane season, making landfall on a sparsely populated stretch of small beach towns and fishing villages in southern Mexico.

The storm hit Oaxaca state Monday afternoon as a strong Category 2 hurricane with maximum sustained winds of 105 miles per hour, then quickly lost power as it moved inland over the mountainous interior.

Agatha was downgraded to a tropical depression by Tuesday morning, with sustained winds down to 35 miles per hour.

The US National Hurricane Center said the storm should dissipate by the evening, but warned that the system’s heavy rains still posed a threat of dangerous floods for Mexico’s southern states.

Oaxaca state’s emergency services office said late Monday that it had no reports of deaths.

Torrential rains and howling winds whipped palm trees and drove tourists and residents into shelters. Oaxaca state’s civil defence agency showed families hustling into a shelter in Pochutla and a rock and mudslide that blocked a highway.

Heavy rain and big waves lashed the beach town of Zipolite, long known for its clothing-optional beach and bohemian vibe.

Agatha formed on Sunday and quickly gained power. It was the strongest hurricane on record to make landfall in May in the eastern Pacific, said Jeff Masters, meteorologist with Yale Climate Connections and the founder of Weather Underground.