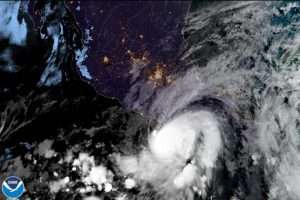 (AP) — Agatha, the strongest hurricane on record to make landfall in May in the eastern Pacific, swept ashore on a stretch of tourist beaches and fishing towns in southern Mexico on Monday.

Agatha made landfall about 5 miles (10 kilometers) west of Puerto Angel as a strong Category 2 storm, with maximum sustained wings of 105 mph (165 kph). It was moving northeast at 8 mph (13 kph).

National emergency officials said they had assembled a task force of more than 9,300 people for the area and more than 200 shelters were opened as forecasters warned of dangerous storm surge and flooding from heavy rains.

Agatha is the strongest hurricane on record to make landfall in May in the eastern Pacific, said Jeff Masters, meteorologist with Yale Climate Connections and the founder of Weather Underground.

The US National Hurricane Center said the storm was expected to drop 10 to 16 inches (250 to 400 millimeters) of rain on parts of Oaxaca, with isolated maximums of 20 inches (500 millimeters), posing the threat of flash floods and mudslides.

Little change in strength was expected before the storm makes landfall, according to the hurricane center. A hurricane warning was in effect between the port of Salina Cruz and the Lagunas de Chacahua.

In Huatulco, municipal authorities cancelled schools and ordered “the absolute closure” of all beaches and its seven bays, many of which are reachable only by boat.