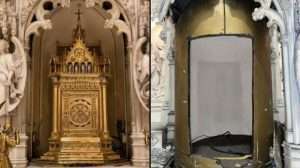 (JAMAICA OBSERVER) – A tabernacle valued at US$2 million was reportedly stolen from a Catholic church in Brooklyn, New York. According to an article from CNN, the theft took place sometime last week and also saw the alleged robbers decapitating the head of several angel statues on the Church’s premises.

CNN reports that “power tools were used to “forcefully cut open” the altar and access the 18-karat gold tabernacle” at the St Augustine Roman Catholic Church.

The tabernacle supposedly dates back to when the church was built in the 1890s and “is irreplaceable due to its historical and artistic value,” the Diocese of Brooklyn said in a statement.

“This is devastating, as the Tabernacle is the central focus of our church outside of worship, holding the Body of Christ, the Eucharist, which is delivered to the sick and homebound,” Father Frank Tumino, pastor of St Augustine, said in the statement from the diocese.

“To know that a burglar entered the most sacred space of our beautiful Church and took great pains to cut into a security system is a heinous act of disrespect,” Tumino said.