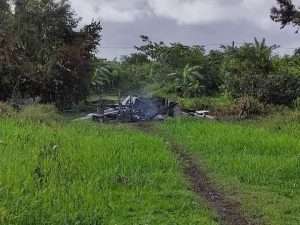 (CMC) – The Guyana Fire Service (GFS) said that the fire that killed three children after they were trapped inside their burning house at Mocha, East Bank Demerara on Thursday, may have been due to an electrical fault.

In a statement, the GFS said that while it had received a distress call at around 1:25 am, the first water tender arrived on the scene 17 minutes later, “but was unable to access the home, which was already entirely engulfed by the fire, due to the deplorable state of the road.”

As a result of the fire, the building was destroyed and eight-year-old Timothy Kippins, six-year-old Triston Kippins, and one-year-old Zhalia Flue perished in the blaze.

“Investigations revealed that the fire was electrical in nature. The Guyana Fire Service would like to express sincere condolences to the family and friends of the children and continues its plea for citizens to take the necessary precautions to avoid fire emergencies.”

The GFS said that it is advising citizens not to leave children unattended or at home without adult supervision.

“Do not leave cooking unattended and ensure stoves are properly turned off when not in use.

Keep children away from the cooking area and ensure matches and lighters are out of reach of children. Make use of fire prevention and fire fighting devices such as smoke detectors and fire extinguishers,” the GFS added.