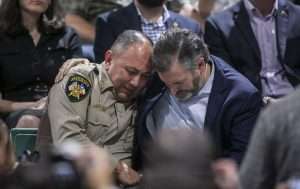 (AP) — Law enforcement authorities faced questions and criticism Thursday over how much time elapsed before they stormed a Texas elementary school classroom and put a stop to the rampage by a gunman who killed 19 children and two teachers.

Investigators were also unable to say with any certainty whether an armed school district security officer outside Robb Elementary in the town of Uvalde exchanged fire with the attacker, 18-year-old Salvador Ramos, when Ramos first arrived on Tuesday.

The motive for the massacre — the nation’s deadliest school shooting since Newtown, Connecticut, a decade ago — remained under investigation, with authorities saying Ramos had no known criminal or mental health history.

During the siege, which ended when a US order Patrol team burst in and shot the gunman to death, frustrated onlookers urged police officers to charge into the school, according to witnesses.

Texas Department of Public Safety Director Steve McCraw said Wednesday that 40 minutes to an hour elapsed from when Ramos opened fire on the school security officer to when the tactical team shot him.

“The bottom line is law enforcement was there,” McCraw said. “They did engage immediately. They did contain (Ramos) in the classroom.”

But a department spokesman said Thursday that authorities were still working to clarify the timeline of the attack, uncertain whether that period of 40 minutes to an hour began when the shooter reached the school or earlier, when he shot his grandmother at home.

“Right now we do not have an accurate or confident timeline to provide to say the gunman was in the school for this period,” Lieutenant Christopher Olivarez told CNN.

Border Patrol Chief Raul Ortiz did not give a timeline but said repeatedly that the tactical officers from his agency who arrived at the school did not hesitate. He said they moved quickly to enter the building, lining up in a “stack” behind an agent holding up a shield.

“What we wanted to make sure is to act quickly, act swiftly, and that’s exactly what those agents did,” Ortiz told Fox News.

But a law enforcement official said that once in the building, the Border Patrol agents had trouble breaching the classroom door and had to get a staff member to open the room with a key. The official spoke on condition of anonymity because he was not authorised to talk publicly about the investigation.

Olivarez said investigators were trying to establish whether the classroom was, in fact, locked or barricaded in some way.