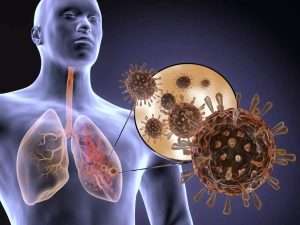 (AFP) — Coronavirus survivors have twice the risk of developing dangerous blood clots that travel to their lungs compared to people who weren’t infected, as well double the chance of respiratory symptoms, a large new study said Tuesday.

The research by the Centers for Disease Control and Prevention found that as many as one in five adults aged 18-64 years and one in four of those over 65 went on to experience health conditions that could be related to their bout of COVID — a finding consistent with other research.

Among all conditions, the risk of developing acute pulmonary embolism — a clot in an artery of the lung — increased the most, by a factor of two in both adults younger and older than 65, as did respiratory symptoms like a chronic cough or shortness of breath.

Pulmonary embolisms usually travel to the lungs from a deep vein in the legs, and can cause serious problems, including lung damage, low oxygen levels and death.

The study was based on more than 350,000 patient records of people who had COVID-19 from March 2020 – November 2021, paired with 1.6 million people in a “control” group who had sought medical attention in the same month as a corresponding “case” patient, but weren’t diagnosed with COVID.

The team assessed the records for the occurrence of 26 clinical conditions previously associated with long COVID.

Patients were followed one month out from the time they were first seen until they developed a subsequent condition, or until a year had passed, whichever came first.

The most common conditions in both age groups were respiratory symptoms and musculoskeletal pain.

In patients under 65, risks after COVID elevated for most types of condition, but no significant differences were observed for cerebrovascular disease, mental health conditions, or substance-related disorders.

“The occurrence of incident conditions following infection might also affect a patient’s ability to contribute to the workforce and might have economic consequences for survivors and their dependents,” as well as placing added strain on health systems.

Limitations of the study included the fact that data on sex, race, and geographic region were not considered, nor was vaccination status. Because of the time period, the study also didn’t factor in newer variants.