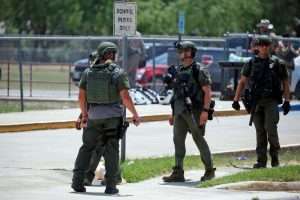 (AP) — The death toll from the shooting at a Texas elementary school has risen to 18 children and three adults, a state senator said.

Senator Roland Gutierrez said he was briefed by state police on the latest fatalities at Robb Elementary School in Uvalde, a heavily Latino community about 85 miles (135 kilometres) west of San Antonio.

Three people wounded in the attack are hospitalised in serious condition, Gutierrez told The Associated Press.

An 18-year-old gunman opened fire Tuesday at a Texas elementary school Governor Greg Abbott said, and the gunman was dead.

It was the deadliest shooting at a US grade school since a gunmen killed 20 children and six adults at Sandy Hook Elementary in Newtown, Connecticut, almost a decade ago. And it came just 10 days after a gunman in body armor killed 10 Black shoppers and workers at a supermarket in Buffalo, New York, in what authorities say was a racist attack.

Federal law enforcement officials said the death toll was expected to rise. They spoke on condition of anonymity because they were not authorised to release investigative details.

The gunman entered Robb Elementary School in Uvalde with a handgun and possibly a rifle, Abbott said. Officials did not immediately reveal a motive, but the governor identified the assailant as Salvador Ramos and said he was a resident of the heavily Latino community about 85 miles (135 kilometers) west of San Antonio.

A Border Patrol agent who was nearby when the shooting began rushed into the school without waiting for backup and shot and killed the gunman, who was behind a barricade, according to a law enforcement official speaking on condition of anonymity because he was not authorised to talk about it.

The agent was wounded but able to walk out of the school, the law enforcement source said.

Abbott said the shooter was likely killed by police officers but that the events were still being investigated. The school district’s police chief, Pete Arredondo, said that the attacker acted alone.

The massacre of young children was another gruesome moment for a country scarred by an almost ceaseless string of mass killings at churches, schools and stores. And the prospects for any reform in the nation’s gun regulations seemed at least as dim as in the aftermath of the Sandy Hook deaths.