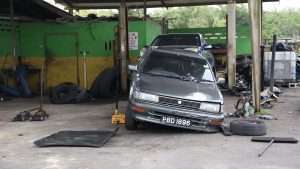 (TT GUARDIAN) – A 36-year-old mechanic was crushed to death by a car during a freak accident at a tyre shop in Penal on Saturday.

Boodoo was self-employed but he had rented a space at Chattoos Tyre Shop, Syne Village, Penal, to do his jobs.

A few days ago someone brought in a Toyota Corolla for him to work on. Guardian Media was told that he was working under the vehicle which was elevated off the ground, the jacks tilted and the car fell on his chest and head.

According to a police report, around 6 pm an air condition technician came to the shop to fix the air-conditioning in Boodoo’s vehicle.

After several calls to Boodoo’s phone went unanswered, he decided to leave.

However, he then noticed that Boodoo was pinned under the front right side of a vehicle.

He said he raised an alarm and another man came to assist.

However, by the time they raised the vehicle off of Boodoo using a trolley jack, Boodoo was already dead.

When the police arrived, they noticed that two dummy trucks under the Corolla were tilted.

Boodoo’s body had no cuts or bruises, police said.

The body was taken to the mortuary at the San Fernando General Hospital for a post mortem this week.

When Guardian Media visited the tyre shop yesterday, Boodoo’s wife was there, but she declined to be interviewed.