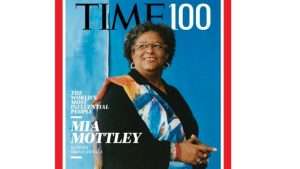 (CMC) – Barbados’ Prime Minister Mia Mottley has been listed in the US publication, 2022 TIME100, as one of the most influential people in the world.

In the TIME article, written by the Director General of the World Trade Organization (WTO), Okonjo-Iweala, Mottley, who led her ruling Barbados Labour Party (BLP) to clean sweeps of the last two general elections in her country, has been described as “bold, fearless, and possessing a great intellect and wit, the Prime Minister is a brilliant politician who knows how to shake things up.”

The article, which listed 100 influential people, highlighted Mottley’s riveting speeches at COP26 in Glasgow late last year, when she chided the world’s leaders for not working more diligently to limit the potential catastrophic impacts of climate change.

It further noted Mottley’s work as chair of the World Bank and the International Monetary Fund’s Development Committee, where she reminded the world’s finance gurus that the level of a country’s per capita income may not always be the best measure of its wealth.

“The Prime Minister strides boldly on the world stage. She is an embodiment of our conscience, reminding us all to treat our planet, and therefore one another, with love, dignity, and care,”

Okonjo-Iweala wrote, lauding Mottley, the first woman to head a government in Barbados, as a Barbadian icon.