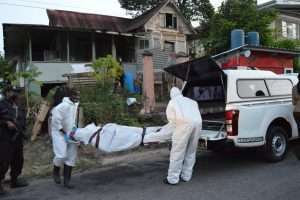 (TT GUARDIAN) – A 76-year-old man has been stabbed to death following what police believe was a domestic dispute with a female relative at a home in San Juan.

Police said around 3 pm yesterday, Roy Phillip, of 12 Prizgar Road, was engaged in an argument with a 30-year-old female relative in a one-bedroom apartment on the western side of the compound.

Police said the victim allegedly threw a pot of boiling lentil peas on the woman, scalding her about 75 per cent of the chest and lower abdomen.

According to police, the woman allegedly retaliated and dealt the victim a stab in his chest. He died on the scene.

The suspect was attended to by the Emergency Health Services and taken to the Eric Williams Medical Sciences Complex, Mt Hope, for further medical attention by WPC Sequea of the San Juan CID.

The suspect was said to be incoherent when investigators attempted to speak to her.