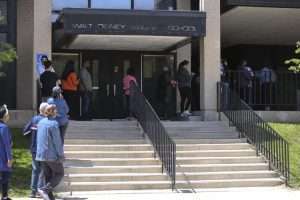 (AP) — A Chicago mother has been charged with child endangerment after a gun in her second grader’s backpack accidentally discharged at school, injuring a 7-year-old classmate, police said Wednesday.

The 28-year-old woman appeared in court on Wednesday on three misdemeanor child endangerment counts. A judge ordered her release from Cook County Jail on $1,000 bond.

During the hearing, prosecutors alleged that the woman’s 8-year-old son found the gun underneath her bed and took it to Walt Disney Magnet School on the city’s North Side on Tuesday. The mother has a valid firearm owners identification card.

According to police, the backpack was in the boy’s classroom when, just before 10 am on Tuesday, the gun discharged. The Chicago Sun-Times reported that prosecutors said during the hearing that the bullet ricocheted off the floor and grazed the child’s abdomen. The child was taken to a hospital in good condition, police said.

In an email to parents, the school’s principal said the bullet “caused some debris to ricochet in your child’s classroom, which hit a member of our school community and caused minor scrapes.”

Play Now In Your BrowserHero Wars

The school did not respond to a request for comment on Wednesday.

A teacher then grabbed the backpack and gave it to security officers who found a Glock 19 handgun inside, prosecutors said during the hearing.

The woman’s attorney, Rodger Clarke, acknowledged that the gun should have been locked up and not just placed under the bed. But, he said, “This wasn’t something she planned or something she did on her own volition.”

Cook County Judge Michael Hogan was not impressed by that argument.

“This may not have been an intentional act, but it is a supremely negligent act,” he said.