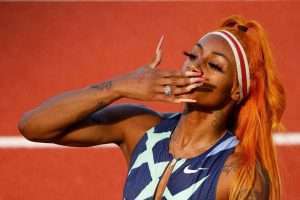 (JAMAICA OBSERVER) – American sprinter Sha’Carri Richardson says she is “still healing” from an abusive relationship with a Jamaican female athlete.

Richardson made the revelation on social media Sunday as questions lingered about her reported sudden withdrawal from a 100m showdown with world champion Shelly-Ann Fraser-Pryce at a meet in Kenya last week.

“I was in a relationship with a Jamaican athlete that never cared about me from the jump,” the American sprint star wrote on Instagram.

“I was abused and stole from yet protected her from the judgement of her country and family while they dragged me. I had to deal with homophobic and so much more that I’m still healing from,” she said.

Richardson has struggled to meet expectations after a promising start to her professional track and field career saw her being tipped to light up the Tokyo Olympics. However, she did not compete in Tokyo after failing a drug test and has underwhelmed on the circuit since.

She is yet to open her 2022 track and field season.