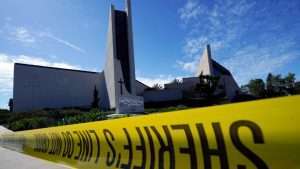 (NEW YORK POST) – One person was dead and several others injured during a shooting took place at a California church on Sunday, cops said.

Sheriff’s deputies in Orange County responded to a report of a shooting at the Geneva Presbyterian Church on El Toro Road in Laguna Woods at around 2 p.m. local time.

The sheriff’s department said that churchgoers subdued the shooter and hogtied him with extension cords. The shooter was in custody and they have obtained two handguns that they believe he used in the shooting.

“Four victims have been critically wounded, one with minor injuries,” the Orange County Sheriff’s Department wrote on Twitter. “All victims are adults and are enroute to the hospital. One victim is deceased at the scene.”

It was not immediately clear what the shooter’s motive may have been.

The incident takes place one day after a white supremacist killed 10 people during a shooting at a supermarket in Buffalo.