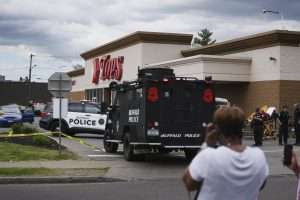 (CMC) – Caribbean American legislators late Saturday expressed profound outrage over the mass shooting in Buffalo, an upstate New York city bordering Canada, by a white teenage assailant enthralled by a white supremacist ideology known as replacement theory, who systematically shot and killed 10 people and injured three others, almost all of them Black, at a supermarket.

Law enforcement authorities said Payton S. Gendron, 18, of Conklin, a small town in New York’s rural Southern Tier, drove over 200 miles to launch the massacre, described as one of the deadliest racist massacres in recent American history. Police said he live-streamed the attack at a Tops Friendly Markets supermarket.

“This was a purely evil act by a racist extremist, and I am deeply heartbroken and saddened by this senseless act of cowardly violence committed against unsuspecting shoppers,” Congresswoman Yvette D. Clarke, the daughter of Jamaican immigrants, told the Caribbean Media Corporation (CMC). “My heart goes out to all the victims and the families affected by this horrific tragedy.

“Beyond condolences and outrage, it’s clear America needs a national strategy to combat domestic terrorism once and for all,” added Clarke, who represents the predominantly Caribbean 9th Congressional District in Brooklyn, New York. “Sadly, this is not a phenomenon. Black communities across our nation continue to be under threat of domestic terrorism and racist extremists.

“Racism has had a long and brutal history inflicting wrenching pain and generational trauma on our bodies since the birth of our nation – from lynchings, Jim Crow policies, to the burning of Black Wall Street and Dylann Roof calmly gunning down Black worshipers praying in church,” she continued. “Black people continue to endure these vicious racist attacks on our humanity, our culture and our civil rights. Enough is enough.”

The congresswoman said “the time has come to confront this incessant hatred with the same determination it has in dehumanizing Black people and other marginalized groups.

“We must come together as a nation to address this level of violence and the factors that lead up to it and stop it for good,” Clarke urged. “This must be a mission that unites all Americans because racism threatens our public safety and corrodes our democracy.”

New York City Public Advocate Jumaane Williams, the son of Grenadians, who is contesting next month the Democratic Primary for Governor of New York, described the massacre as “senseless,” adding that  “no answers will suffice in the face of the inexplicable.”

He noted that the Atlanta, Georgia-based US Centers for Disease Control and Prevention (CDC) announced last week that 45,000 people were killed by gun violence in 2020, “a tragic record and an indictment of our failures on all levels of government to combat this crisis and save lives.

“The threat of gun violence in our subways, our supermarkets, on our streets, will continue until we can finally, meaningfully, address both the systems that enable individuals to perpetuate senseless violence and the weapons that enable such suffering,” Williams told CMC.

“The shock and horror of this never get easier to bear, no matter how many times we’re forced to go through it,” Bichotte Hermelyn, who represents the 42nd New York State Assembly District in Brooklyn. “The people of Buffalo, indeed everyone in America, need more than just ‘thoughts and prayers; we need action.

“We must continue the fight against gun violence,” she added. “Our lives depend on it. We must pass laws that stop extremism and gun violence from continuously causing chaos in the lives of New Yorkers.”

Murad Awawdeh, executive director of the New York Immigration Coalition (NYIC), an umbrella policy and advocacy organization that represents over 200 immigrant and refugee rights groups throughout New York state, said NYIC was “devastated that ordinary people cannot be safe from gunfire and anti-Black violence at their local grocery store.

“Ten innocent lives were lost, and three people were injured, at the hands of a self-proclaimed white supremacist,” he noted. “The biggest threat to the US is white supremacy and, today, it reared its ugly head when the shooter targeted Black families shopping for their weekly groceries at their local supermarket.

“We condemn today’s actions, and demand that our elected leaders address and reform gun laws and invest in community solutions that will bring real safety for all,” Awawdeh added. “Until then, we will continue to fight for Black lives and racial justice for all.”

New York Governor Kathy Hochul, who is from Buffalo, told a press conference on Saturday: “This is my community. I know this community well, I’ve walked these streets. I know the individuals who live here. It’s a wonderful tight-knit neighbourhood.

“And to see that sense of security shattered by an individual, a white supremacist who has engaged in an act of terrorism and will be prosecuted as such, it strikes us in our very hearts to know that there is such evil that lurks out there,” she added.

“I’ve seen violence from guns on the Brooklyn subway and now in the streets of Buffalo, it has to stop. It has to stop,” Hochul demanded. “On Tuesday in Albany, we had already planned to be announcing a comprehensive gun package to address further loopholes that exist in our laws. We are doing everything we can to ensure that our laws are tight, they’re ironclad, to ensure that our law enforcement has the resources they need.”

At his arraignment on Saturday, Gendron pleaded not guilty to first-degree murder.

Prosecutors said he faces life in prison without the possibility of parole.

The US Department of Justice Saturday night released a statement from Attorney General Merrick B. Garland.

“Tonight, the country mourns the victims of a senseless, horrific shooting in Buffalo, New York,” he said, stating that the Federal Bureau of Investigations (FBI) and the Bureau of Alcohol, Tobacco, Firearms and Explosives (ATF) are working closely with the Buffalo Police Department and federal, state and local law enforcement partners on the matter.

Garland added that the Justice Department is investigating this matter as “a hate crime and an act of racially-motivated violent extremism.

“The Justice Department is committed to conducting a thorough and expeditious investigation into this shooting and to seeking justice for these innocent victims,” he continued.