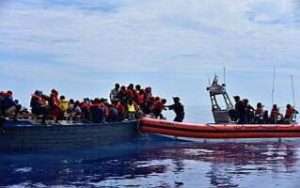 (CMC) – The United States Coast Guard says it has repatriated 207 Haitian migrants to Cap-Haitien, Haiti after they were intercepted 20 miles south of the Turks and Caicos Islands.

The US Coast Guard said it had “spotted the grossly overloaded vessel and deployed their small boat with life jackets to give to the passengers due to safety of life at sea concerns”.

“We are urging families in the US to ask their loved ones not to risk their lives on this dangerous journey,” said Commander Anne O’Connell of the Coast Guard Cutter Campbell.

“These voyages are extremely hazardous and often involve rustic vessels that are overloaded, and lack food, water and basic safety equipment,” she added.

Since October 1, 2021, the US Coast Guard said its crews have intercepted 4,449 Haitian migrants compared to 1,527 in the previous year.

The US Coast Guard also said that its cutter, Joseph Tezanos, repatriated 44 Dominican Republic nationals to a Dominican Republic Navy vessel Wednesday following the interdiction of two illegal voyages in the Mona Passage near Puerto Rico.

“These interdictions are the result of ongoing local and federal multi-agency efforts in support of the Caribbean Border Interagency Group CBIG,” the US Coast Guard said.

“To anyone looking to take part in an illegal voyage, do not take to the sea,” warned Captain Gregory H Magee, commander of US Coast Guard Sector San Juan.

“You will be putting your life at risk, and, if caught, you will be returned to your country of origin or you could find yourself facing criminal prosecution in US courts.”