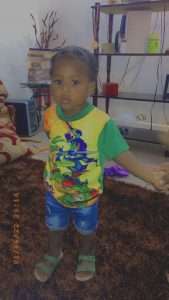 (TT GUARDIAN) – An outpatient of a psychiatric clinic has given police a verbal confession that he killed two-year-old Kymani Francis, whose body was found in the Guapo River on Tuesday after he went missing on Monday.

Acting Police Commissioner McDonald Jacob has confirmed the latest development, saying that the police will investigate the claim but noted the police are awaiting the result of today’s autopsy before taking the process forward.

The man has been detained by police after asking officers to lock him up for the “crime”.

Police say the man, who appeared to be in his thirties, is from Techier Village, Point Fortin, the same area where the young child lived.

In making his claim, the man did not mention Kymani by name or gender.

Police have not disclosed how many details the man gave in his statement after walking into the Point Fortin Police Station around 12.45 pm.

According to officers, the man was also talking incoherently.

Jacob has said that there is no other person in custody in connection with the case but did not say if there are any other person or persons of interest in this matter.

Kymani left home on Monday morning and allegedly walked along a dusty road out of the sight of a neighbour and workers who saw him.

A massive search involving members of the military, police, hunters and residents failed to find the boy on Monday. However, he was found in the river the next day, in a place searched several times the day before.

The autopsy was delayed on Wednesday pending a COVID-19 test.

Authorities have confirmed the tests were negative, allowing for the autopsy to be done today.