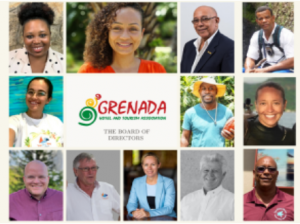 PR – Following the hosting of its 59th Annual General Meeting (AGM) held virtually on Thursday, May 12, 2022, a  new Board of Directors were elected to serve within the Grenada Hotel and Tourism Association (GHTA).

Nominations were invited for five vacant hotel seats to be filled. This was as a result of the expiration of terms for half of the board members who had previously served for two years. During the elections that  were held at the AGM. Kendra Hopkin Stewart was elected, unchallenged to the post of GHTA President.

Kendra Hopkin Stewart is the Deputy Manager of the indigenous, family owned, Blue Horizon Garden  Resort and has managerial experience in both Marketing and Food and Beverage.

Other members of the Board that were elected at Thursday’s AGM, were Vice President, Peter Fraser,  General Manager of Sandals Beach Resort & Spa, Treasurer, Lotten Haagman Friday of SeaBreeze Hotel,  Secretary, Kevin Cooper of Mount Cinnamon Hotel. Tourism Director, Christine Finney of EcoDive and Hotel  Director, Russ Fielden were also elected. Other members of the Board whos term have not yet expired and  therefore, will retain their seat are: Tourism Director, Aaron Sylvester of Tri-Island Chocolate, Tourism  Director, Mandoo Seales of Mandoo Tours and Affiliate Director, Marie Fielden of CMS.

The GHTA’s 59th AGM comes at a pivotal time for the tourism sector as well as for its members. With the  recent reopening of Grenada, businesses are slowly beginning to recover but still yet to thrive.  Nevertheless, the Association says that its not only committed to bringing prosperity back to the sector but  to leaving a lasting imprint for the future of Grenada.

The Keynote Address was delivered by Minister Modeste- Curwin, Minister of Tourism and Civil Aviation  who outlined some of the prospects that were on the horizon while outgoing President, Leo Garbutt shared  the past successes of the Association.

CEO, Arlene Friday stated that the main focus of the Association, as it charts the way forward, is to  prioritize membership growth, promote inclusivity and reset expectations. She billed the upcoming term as  “the year of return & recovery” of its members. “Together, she stated,” the GHTA can move mountains.”

President Kendra Hopkin stated in her inaugural remarks that “if the pandemic has taught us anything, is  that we are stronger together as an industry. It has also taught us to use our differences and uniqueness as  a collective advantage for the growth, development and sustainability of Tourism here in Grenada”

The President and newly elected Board will serve from 2022-2024.