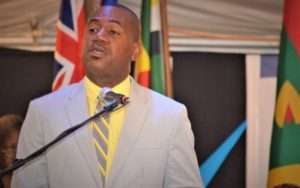 Richards told reporters at the Robert L Bradshaw International Airport that after Prime Minister Harris made his national broadcast on Tuesday, “a number of people called and told me what was said.

“Interestingly, I was overseas attending a funeral and on my way back, I was informed of this particular development,” he added.

Harris said he had asked Governor General Samuel Seaton to dissolve Parliament with immediate effect after announcing the dismissal of several ministers, including Richards and Nevis Premier Mark Brantley who served as foreign affairs minister.

Harris, who was due to have faced a motion of no confidence that had been submitted by six members of the coalition National Unity government, said that he would soon announce the date for the general election.

The PLP controlled two of the nine seats in the coalition government with the two other seats in the National Assembly belonging to the opposition St Kitts-Nevis Labour Party (SKNLP), which has already called for fresh general elections to end the crisis in the government.

“This has not done any damage to the People’s Action Movement or CCM. As a matter of fact, I think it has given our supporters a greater resolve in ensuring that after the next general election Dr Harris will not be the next Prime Minister of St Kitts and Nevis, that is certain,” Richards told reporters.

Asked to comment on the decision by PAM deputy political leader Eugene Hamilton to accept the position of deputy prime minister among other portfolios in the new Cabinet, Richards said “I don’t think it came as a surprise to the People’s Action Movement.

“Eugene Hamilton, as people would be aware when we indicated that we no longer support Dr.Harris as Prime Minister, had taken a position that he was not going to sign that particular letter. That meant that he has remained of the Dr Harris Cabinet.”

Richards also indicated that the PAM Council will decide on Hamilton’s future within the party.

“That is a decision for the council to make and not myself,” said Richards.

Meanwhile, the SKNLP leader Dr Terrence Drew, has told supporters that “liberation day” is near as the twin-island Federation prepares for an imminent general election.

He said the last seven years had seen failed promises made to the population by the coalition administration, several long years of promising a new Basseterre High School, a new JNF and good governance, as well as “misappropriation of funds, corruption and greed, seven long years of putting you the people last”.

The SKNLP has already announced its candidates for the elections and Drew said “we owe it to our children to correct the wrong with the power of the vote.

“I urge all eligible voters to ensure your names are on the voters’ list and that your IDs are up to date. In this upcoming election, we are fighting for the very soul of our democratic and peace-loving country,” he added.