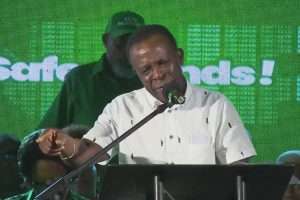 (CMC) – Prime Minister Dr Keith Mitchell has told Grenadians to await a major announcement on Saturday amid speculation that he will announce the date for the next general election that is constitutionally due by June next year but widely expected to be held this year.

Mitchell will be the featured speaker at the ruling New National Party (NNP) rally this weekend to launch two of its candidates for the polls.

Addressing a political meeting on Wednesday night at the launch of the Minister for Social Development, Housing and Community Development, Delma Thomas, as the candidate for the St Andrew North West constituency, Mitchell told supporters that he understands the current mood of the population, and very soon they will be voting for a new government.

“I told you I understand the mood of the country, the people want to vote, I understand this…make sure everybody gets registered, make sure you do your canvas, do your one in 10, make sure that everything is ready,” said Mitchell, one of the longest-serving prime minister in the Caribbean Community (CARICOM).

“I am going to start the ball rolling on Saturday with a major announcement on Saturday in Telescope, so come one and all,” said Mitchell, who has led the NNP on three occasions to clean sweeps of all 15 seats in the 15-member Parliament.

Constitutionally, the general election is due no later than June 2023 and the two main political parties – NNP and the National Democratic Congress (NDC) – are preparing for a poll this year. They have both named candidates for the 15 constituencies.

The NNP is seeking to return to the office for a third consecutive term, having won all the seats in the last two general elections.