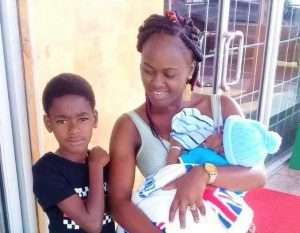 (TT GAURDIAN) – A woman and her 12-year-old son were stabbed to death in their home in Penal this morning.

The attack occurred sometime after 1 a.m.

The woman’s other son, a three-year-old, was found in the house but he was not hurt.

Abeo Cudjoe, 30, died at the house at Lachoos Road, bleeding from her wounds, her son Levi Lewis ran about a quarter-mile to his grandfather’s house for help.

His grandfather rushed him to the hospital and called the police.

Levi was waiting for his SEA results.

Police are searching for a suspect, a soldier, who is known to the woman.

Officers of the Homicide Bureau of Investigations Region 3 are investigating.