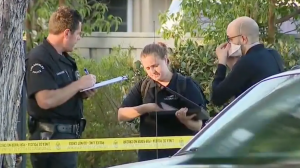 (NEW YORK POST) – A Los Angeles mother has been charged with murdering three of her seven kids — and the woman’s teenage son also has been arrested in connection with the deaths, according to police.

Angela Flores, 38, who is said to be a mother of seven, was booked into the Los Angeles County jail Sunday night on three counts of murder for allegedly killing her 8-year-old twin boys and a 12-year-old daughter. Her bail was set at $6 million.

The LAPD confirmed to The Post Monday that a juvenile also was involved in the triple homicide and has been arrested.

An agency spokesperson declined to name the second suspect because he is a minor, but Fox 11 reported that he is Flores’ teenage son, who was seen running to a neighbor’s home before police arrived.

Flores’ three other children live out of state with their father and were not harmed.

A representative of the Los Angeles County Department of Medical Examiner-Coroner told The Post in an email that the identification of the three deceased children was pending.

Police were called to Flores’ home in the 22000 block of Victory Boulevard in the West Hills section of LA at around 7:40 a.m. Sunday after getting a call about an assault with a deadly weapon.

Paramedics said the children had been dead for several hours. It’s unclear at this time how they died.

Flores was taken into custody and initially transported to a hospital for a mental health evaluation.

A neighbor told Fox 11 that she heard screaming from the home before police were summoned.

“I couldn’t see anybody, and I kept hearing, ‘My family is abusing me,’ and just kept hearing screaming, but I couldn’t make out what she was saying,” said the neighbor, Priscilla Canales.