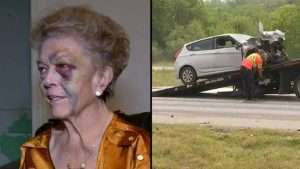 (JAMAICA OBSERVER) – A carjacker who severely wounded a great-grandmother was killed in a car crash shortly after stealing the vehicle.

According to reports, 71-year-old San Antonian Shirlene Hernandez was running errands when the thief approached her. It is reported that the man hit her in the face several times and ripped the keys from her hands, before driving off with her car.

Following the carjacking, police found the car on the interstate highway, but it was totalled. The suspected carjacker’s body was found inside.

Despite being shaken by the experience, the great-grandmother isn’t letting the crime shape her life as she continues to work while saving for another car.

A GoFundMe has been launched by her granddaughter to help her purchase a vehicle so she could get to ‘work or appointments’. It has already raked in over US$20,000.