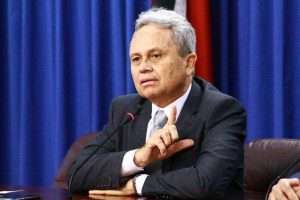 (CMC) — The Trinidad and Tobago Government recently announced an increase in fuel prices even as it acknowledged that it is cognisant of the effect it will have on consumers.

Finance Minister Colm Imbert, speaking in the Parliament, said that the increase in fuel prices will take effect from April 19 and that the adjustments were being made on the basis of factors such as the effect of the Russian invasion of Ukraine of international oil prices.

“The Government is cognisant of the effect of an increase in the price of fuel on consumers, notwithstanding the fact that a fuel subsidy is a regressive measure.

Imbert told legislators that Cabinet decided on Thursday there should be a partial adjustment of the prices of motor fuels, “not to the full market prices, but sufficient to allow an equal distribution of the cost.”

The Government said the cost of liquefied petroleum gas (LPG) will remain fixed at TT$21 for a 20-pound cylinder of cooking gas for domestic customers, while the price of kerosene will be adjusted to TT$3.50 per litre which is little over half the true market price.