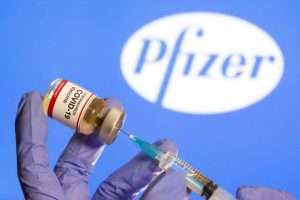 (AFP)— A COVID-19 vaccine effective against multiple variants is possible before the end of 2022, the head of US pharmaceutical giant Pfizer said Wednesday.

Chairman Albert Bourla said the firm was also working on producing a vaccine that could provide good protection for a whole year, meaning people would come back annually for boosters, as with influenza shots.

“I hope, clearly by autumn… that we could have a vaccine” that worked against not only the dominant Omicron but all known variants, he said.

“It is a possibility that we have it by then. It is not a certainty,” he told a media briefing organised by the International Federation of Pharmaceutical Manufacturers and Associations (IFPMA) big pharma lobby group.

The Pfizer-BioNTech vaccine is one of the most effective against COVID-19.

Though, like other jabs, it has seen waning effectiveness against the now-dominant Omicron variant of the virus, it still offers strong protection against serious disease, hospitalisation and death.

IFPMA director general Thomas Cueni said the world had to learn to live with the virus that causes COVID-19 disease, saying: “We are beyond the time when you can eradicate SARS-CoV-2.”

Bourla said there was a risk of vaccine fatigue, predicting that few people who have so far declined the chance to be vaccinated would change their minds, and suggesting that fewer people would come back for fourth doses than came forward for a third, booster dose.

“What the world really needs is a vaccine that will last a year. I think this is what will become the optimal public health solution,” he said.

“It’s way more easy to be administered and have the population be compliant with that.

“It is very challenging, technically, to do it with this virus — but we are working on it.”

But so far, the UN health agency has only authorised eight vaccines and versions thereof: those made by Pfizer-BioNTech, AstraZeneca, Janssen, Moderna, Sinovac, Sinopharm, Bharat Biotech and Novavax.

The IFPMA briefing condemned suggestions that intellectual property rights on COVID-19 vaccines should be temporarily lifted during the pandemic, in a bid to increase production.

With more than a billion vaccine doses being produced every month, Eli Lilly chairman David Ricks called it “a solution looking for a problem”, while Bourla branded the idea “insane”.

The problem, she said, was more one of logistics and getting doses into arms in countries, especially in Africa, where only 13 per cent have been fully jabbed.

“We are able to now supply as many doses as countries want, on demand, to them. The issue now really is on delivery,” she said.