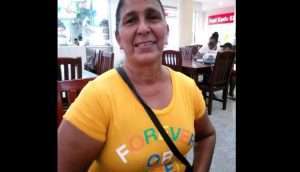 (CMC) – Police are searching for a 56-year-old Guyanese man after his wife, Savitri Raj, was brutally stabbed to death at their home on Tuesday.

The man has been identified as Vijimal Raj, an East Coast Demerara resident, who according to Guyanese law enforcement is now on the run.

Police say the body of 57-year-old Savitri was discovered in a bloodied state by her son in the early hours at their 15th Street Foulis, East Coast Demerara home. The mother of three was reportedly stabbed multiple times allegedly by her husband.

The couple had been married for 33 years, but three weeks ago, his wife filed a complaint against her husband alleging that he had physically assaulted her by beating her with a bottle.

He was arrested and charged last week, and released on bail. The couple continued to live together and was due to return to court on Wednesday for the continuation of the assault case.