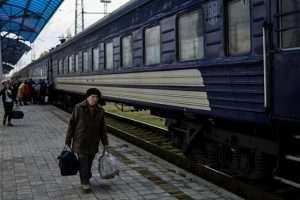 (AFP)— More than 4.6 million Ukrainians have now fled the war, the United Nations said Tuesday, though the smaller numbers of new refugees are arriving in a more vulnerable condition.

“Even though the numbers of people crossing the borders has declined significantly, those who have been crossing we’ve noticed have been in a more vulnerable state, have had lesser means and have also had less of a plan as to where they might go,” UNHCR spokesman Matt Saltmarsh said in Geneva.

Women and children account for 90 per cent of those who have left Ukraine, with men aged 18 to 60 eligible for military call-up and unable to leave.

The UN’s International Organization for Migration estimates that 7.1 million people have fled their homes but are still in Ukraine.

The IOM says that in addition to Ukrainian refugees, more than 210,000 non-Ukrainians living, studying or working in the country have also left.

In total, more than a quarter of the population have been forced to flee their homes.

“In just six weeks, nearly two-thirds of all Ukrainian children have been displaced. They have been forced to leave everything behind: their homes, their schools, and often, their family members,” UNICEF emergency programmes director Manuel Fontaine told a UN Security Council briefing.

“Of the 3.2 million children estimated to have remained in their homes, nearly half may be at risk of not having enough food.

“Fortunately, there has been an outpouring of support from neighbouring countries to welcome refugees.

“It is time to end this war. Ukraine’s children cannot afford to wait.”

Before the invasion, Ukraine had a population of 37 million in the regions under government control, excluding Russia-annexed Crimea and the pro-Russian separatist regions in the east.

Here is a breakdown of how many Ukrainian refugees have fled to neighbouring countries, according to UNHCR:

Many people who go to Ukraine’s immediate western neighbours travel on to other states in Europe’s Schengen open-borders zone.

A total of 701,741 Ukrainians entered the EU member state, including a large number who crossed over from Moldova, wedged between Romania and Ukraine.

The vast majority are thought to have gone on to other countries.

Another 433,083 refugees have sought shelter in Russia.

In addition, 113,000 people crossed into Russia from the separatist-held pro-Russian regions of Donetsk and Lugansk in eastern Ukraine between February 21 and 23.

A total of 428,954 Ukrainians have entered Hungary.

The Moldovan border is the closest to the major port city of Odessa. A total of 413,374 Ukrainians have crossed into the non-EU state, one of the poorest in Europe.

Most of those who have entered the former Soviet republic of 2.6 million people have moved on.

A total of 320,246 people crossed Ukraine’s shortest border into Slovakia.

Another 21,292 refugees have made it north to Russia’s close ally Belarus.