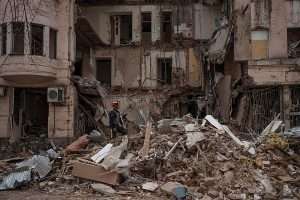 (AP) — The mayor of the Ukrainian port city of Mariupol said Monday that more than 10,000 civilians have died in the Russian siege of his city, and that the death toll could surpass 20,000, with corpses that were “carpeted through the streets.”

Speaking by phone Monday to The Associated Press, Mayor Vadym Boychenko also said Russian forces brought mobile cremation equipment to Mariupol to dispose of the bodies, and he accused Russian forces of refusing to allow humanitarian convoys into the city in an attempt to conceal the carnage.

Russian forces have taken many bodies to a huge shopping center where there are storage facilities and refrigerators, Boychenko said.

“Mobile crematoriums have arrived in the form of trucks: You open it, and there is a pipe inside and these bodies are burned,” he said.

The mayor’s comments emerged as Russia claimed that it destroyed several Ukrainian air-defense systems in what appeared to be a renewed push to gain air superiority and take out weapons Kyiv has described as crucial ahead of an expected broad new offensive in the east.
In one strike, Moscow said it hit four S-300 launchers near the central city of Dnipro that had been provided by a European country it did not name. Slovakia gave Ukraine just such a system last week but denied it had been destroyed. Russia previously reported two strikes on similar systems in other places.

The failure to win full control of Ukraine’s skies has hampered Moscow’s ability to provide air cover for troops on the ground, limiting their advances and likely exposing them to greater losses.

With their offensive in many parts of the country thwarted, Russian forces have relied increasingly on bombarding cities — a strategy that has left many urban areas flattened and killed thousands of people.

Ukrainian authorities accuse Russian forces of committing atrocities, including a massacre in the town of Bucha, outside Kyiv, airstrikes on hospitals and a missile attack that killed at least 57 people last week at a train station.