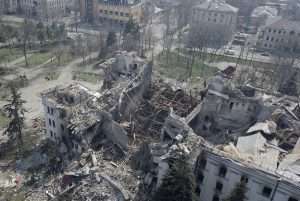 (AFP)— Ukrainian forces are preparing for a “last battle” to control the southern port of Mariupol, besieged by Russians since the invasion, marines in the city said Monday.

“Today will probably be the last battle, as the ammunition is running out,” the 36th marine brigade of the Ukrainian armed forces said on Facebook.

“It’s death for some of us, and captivity for the rest,” it added, saying it had been “pushed back” and “surrounded” by the Russian army.

It said it had been defending the port for 47 days and “did everything possible and impossible” to retain control of the city.

Russian forces have said that fighting has recently centred around the city’s Azovstal iron and steel works and in the port.

The marines said that is where “the enemy gradually pushed us back” and “surrounded us with fire, and is now trying to destroy us”.

Around half of its men are wounded, the brigade said.

“The mountain of wounded makes up almost half of the brigade. Those whose limbs are not torn off return to battle.

“The infantry was all killed and the shooting battles are now conducted by artillerymen, anti-aircraft gunners, radio operators, drivers and cooks. Even the orchestra.”

The marines also complained of a lack of support from Ukraine’s military leadership: “No one wants to communicate with us anymore because we’ve been written off.”

But the commander-in-chief of the Ukrainian armed forces Valeriy Zaluzhny wrote on Facebook that “the connection with the units of the defence forces that heroically hold the city is stable and maintained”.

The Ukrainian army is doing everything to “win and save the lives of personnel and civilians in all directions”, he added.

Mariupol has seen the most intense fighting since the Kremlin launched its attack on Ukraine, with the city being virtually razed to the ground.

Thousands of civilians are thought to have died in the city.

Evacuees have spoken of harrowing conditions of hunger and cold, with civilians hiding in basements.