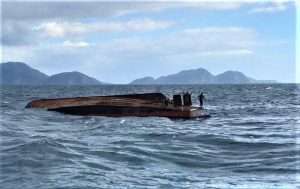 (TRINIDAD EXPRESS) – The Trinidad and Tobago Coast Guard (TTCG) refused comment on Wednesday, amid reports that five crewmen missing after the St Vincent-registered cargo boat Fair Chance overturned in Trinidad waters on Saturday, had been found dead in the hull, after it was towed to TTCG headquarters at Staubles Bay, Chaguaramas on Tuesday.

The response from one of the two Coast Guard officers tasked with giving information to the public was: “The TTCG has released two statements on this matter which were disseminated on Sunday and Monday. The matter is still ongoing at this time.”

The last statement from the Coast Guard was that the partially-submerged Fair Chance had been towed into Trinidad waters after drifting into Venezuelan waters, and two survivors, who were picked up by a passing boat on Saturday, had been identified as Derrel Small and Jeron McIntosh.

The TTCG said the other crew members who are still missing are the boat’s captain Dexter Chance along with Owen Prescott, Quincey Baptiste, Devon Celestine and Eric Calliste and the TTCG officers would not respond to reports that the five men may have still been alive when the Coast Guard responded to the Fair Chance distress call on Saturday afternoon.

With local marine interests questioning the Coast Guard’s methods in the incident, Fishermen and Friends of the Sea (FFOS) corporate secretary Gary Aboud said, that instead of bringing the vessel closer to shore, divers should have been sent into the partially-submerged hull to look for survivors.

Aboud speculated that the vessel could have had air pockets which would have given the men limited oxygen availability.

The FFOS official called on National Security Minister Fitzgerald Hinds to “make public whether any T&T Coast Guard diver went into the overturned vessel to determine whether survivors were trapped or injured”.

The Express asked similar questions yesterday but there was no reply from the Coast Guard.

The vessel overturned off Trinidad’s North Coast around 3.40 p.m. on Saturday. Two crew members were able to climb out and made their way on to the hull, where they were rescued by a passing pleasure craft which took them to Coast Guard headquarters.

The Fair Chance then drifted into Venezuelan waters.

On Monday, the Coast guard said it had arranged for a tugboat to bring the vessel into shallower local waters but it was a challenging task due to the weight of the vessel, and it was being towed against a powerful current.