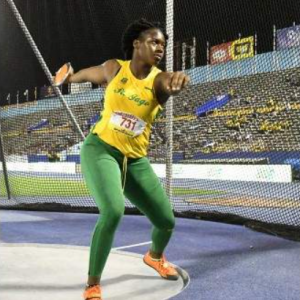 The Grenadian also sent a message that she will have her eyes on an even bigger prize at next weekend’s Carifta Games to be held at the same venue.

Wednesday’s event lived up to its billing and produced exciting competition as Alves, who is also in the javeline final, ended the competition with two big throws as she got 47.49m in the fifth round.

Holmwood Technical’s Cedricka Williams, who was expectd to medal, finished seventh with 44.69m.

Camperdown’s Victoria Christie, who led the qualifying, won the Class Two girls shot put with a mark of 14.59m, the first female gold medal of the championships.

Natassia Burrell of Hydel High took the silver medal with 13.99m, just better then the 13.81m she threw on Tuesday, while Maja Henry of Immaculate Conception was third with 13.51m.

Christie was dominant in the final as she had two other throws that were better than Burell’s, throwing 14.12m and 14.35m, either of which could have won the gold medal.

Friday’s girls Class One shot put final is set to be a cracker, with at least five of the finalists from Class Two last year, including the winner, Alves of St Jago, qualifying for the decider after Wednesday’s preliminaries.

Camperdown’s Brittania Johnson led the qualifying with a best of 14.01m, followed by Edwin Allen’s Rochele Solmon, the Class Two silver medallist last year, who threw 13.24m on Wednesday, while Alves, the Grenadian, was next with 12.74m.

Four athletes were able to get the automatic qualifying mark of 1.65m to lead the qualification to the finals of the Class Four girls high jump: Shanniqua Williams and Daneille Noble of Wolmer’s Girls’, Sabrina Atkinson of Hydel High, and Asia McKay of Edwin Allen High.