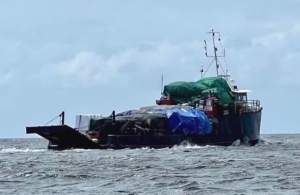 (TRINIDAD EXPRESS) – The Trinidad and Tobago Coast Guard (TTCG) intends to have the partially-submerged vessel Fair Chance towed to shallow waters in the Gulf of Paria so divers can begin searching inside for survivors.

The TTCG said this operation began around 4 p.m. on Sunday.

“The operation is challenging and is taking some time because the vessel is partially submerged while being upside down,” the Coast Guard said in a news release yesterday, adding that “sea conditions are rough, and the direction of the tow is against the predominantly western current”.

The Coast Guard said the vessel is currently in Venezuelan waters, having overturned off Trinidad’s North Coast around 3.40 p.m. on Saturday with seven crew men aboard.

Two were able to climb out of the Vincentian-flagged vessel, made their way on to its hull and were rescued by a passing leisure craft which took them to Coast Guard headquarters at Staubles Bay, Chaguaramas.

Among the seven identified up to yesterday were captain Dexter Chance, Owen Prescott, Quincey Baptiste and Eric Calliste. Two others were identified only as Devon and “Parrot”.

The Coast Guard said an attempt to have the vessel towed earlier was “unsuccessful”, following which the Fair Chance drifted into Venezuelan waters.

“The vessel continues to be monitored in case any of the missing persons that may have been trapped on board is able to make their way out of the vessel and also as a safety precaution to prevent other vessels from colliding with it.

“However, up to the current time, none of the missing persons have been seen or detected,” said the Coast Guard.