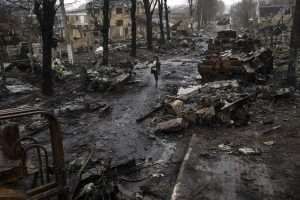 (AP) — Russia faced a fresh wave of condemnation on Monday after evidence emerged of what appeared to be deliberate killings of civilians in Ukraine. Some Western leaders called for further sanctions in response to the alleged atrocities, even as Moscow continued to press its offensive in the country’s east.

Germany’s defense minister suggested the European Union discuss a ban on Russian gas imports, but more senior officials indicated an immediate boycott was not possible — a sign that leaders could struggle in the short-term to ramp up already severe sanctions on Russia.

Ukrainian officials said bodies of 410 civilians were found in towns around the capital, Kyiv, that were recaptured from Russian forces in recent days. In Bucha, northwest of the capital, Associated Press journalists saw 21 bodies. One group of nine, all in civilian clothes, were scattered around a site that residents said Russian troops used as a base. They appeared to have been shot at close range. At least two had their hands tied behind their backs.

The images of battered bodies lying in the streets or hastily dug graves unleashed a wave of outrage that could signal a turning point in the nearly 6-week-old war. But sanctions have thus far failed to halt the offensive, and rising energy prices along with the tight controls on Russian currency market have blunted their impact, with the ruble rebounding strongly after initially crashing.

Western and Ukrainian leaders have accused Russia of war crimes before, and the International Criminal Court’s prosecutor has opened a probe to investigate the conflict. But the latest reports ratcheted up the condemnation even further, with Ukraine’s President Volodymyr Zelenskyy and some Western leaders going so far as to accuse Russia of genocide.

Russia’s Defense Ministry rejected the accusations. It said photos and videos of dead bodies “have been stage managed by the Kyiv regime for the Western media.” The ministry said “not a single civilian” in Bucha faced any violent military action.

In a video shown during the Grammy Awards in Las Vegas for musicians and other artists, Zelenskyy implored them to support his nation and “fill the silence with your music.”

French President Emmanuel Macron said Monday that there is “clear evidence of war crimes” in Bucha.

European Council President Charles Michel earlier tweeted that the EU is assisting Ukrainians and rights groups in gathering evidence to be used in international courts, adding that “further EU sanctions & support are on their way.”

Spanish Prime Minister Pedro Sánchez also called for those responsible for the slayings in Bucha to be punished, saying they should “answer these alleged cases of crimes against humanity, war crimes and, why not say it, of genocide, too.”

Poland’s Prime Minister Mateusz Morawiecki described Russia as a “totalitarian-fascist state,” saying “the bloody massacres perpetrated by Russian soldiers deserve to be called by name: This is genocide.”

The crime of genocide is difficult to prove, as prosecutors would have to show that the killers or their commanders had a “specific intent” to partially or wholly destroy a group of people.

In the meantime, the U.S. and its allies have sought to punish Russia for the war by imposing sweeping sanctions on Russia. But they may be reluctant to impose measures that cause further harm to a global economy still recovering from the coronavirus pandemic. As a major oil and gas exporter, Russia stands to benefit from any rise in already high global energy prices.

Europe is in a particular bind, since it gets 40% of its gas and 25% of its oil from Russia. Governments have been scrambling to find ways to reduce that reliance. Estimates of the impact of a gas boycott on European countries vary but most involve a substantial loss of economic output.

German Vice Chancellor Robert Habeck, who is also the economy minister and responsible for energy, said Europe can go “significantly further” in imposing sanctions against Russia. But he said Germany is right to take a longer-term approach to abandoning Russian energy imports.

Germany has faced criticism for opposing an immediate halt to Russian energy deliveries. The country says it hopes to end Russian coal imports this summer and oil imports by the end of the year, but halting gas will take longer.

“We are working every day on creating the conditions for and steps toward an embargo,” Habeck said. “We are on the right track.”

German Defense Minister Christine Lambrecht had earlier said on public broadcaster ARD that the reports of atrocities were severe enough that European officials “would have to talk about halting gas supplies from Russia.”

Russian President Vladimir Putin’s Feb. 24 invasion has killed thousands of people and forced more than 4 million Ukrainians to flee their country. Putin has said the attack is aimed at eliminating a security threat and demanded that Ukraine drop its bid to join the NATO military alliance of Western countries. Ukraine insists it never posed any threat but has offered to officially declare itself neutral.

The head of Ukraine’s delegation in talks with Russia has said Moscow’s negotiators informally agreed to most of a draft proposal discussed during talks in Istanbul, but no written confirmation has been provided.

While Western officials initially said they believed Putin’s goal was to take Kyiv and potentially install a Kremlin-friendly government, Russian forces faced stiff resistance on their road to the capital and have now retreated from some areas around it. Now, Moscow says it is focusing its offensive on the Donbas in the country’s east, where Russian-backed separatists have been fighting Ukrainian forces for years.

Britain’s Defense Ministry said Monday that Russia is continuing to flood soldiers and mercenaries from the Wagner private military group into the Donbas. It said Russian troops are also still trying to take strategic port city of Mariupol, which lies in the region and has seen weeks of heavy fighting and some of the worst suffering of the war.

“The city continues to be subject to intense, indiscriminate strikes, but Ukrainian Forces maintain a staunch resistance, retaining control in central areas,” the ministry said. “Mariupol is almost certainly a key objective of the Russian invasion as it will secure a land corridor from Russia to the occupied territory of Crimea,” in the south, which Moscow annexed in 2014.

On Monday, the Ukrainian military said its forces had retaken some towns in the northern Chernihiv region and humanitarian aid was being delivered. The road between Chernihiv and Kyiv was to reopen to some traffic, according to the news agency RBK Ukraina.

The mayor of Chernihiv, which has been cut off from food and other supplies for weeks, said Russian shelling has destroyed 70% of the northern city.