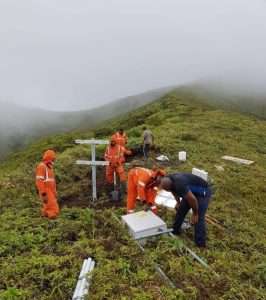 (CMC) – The National Emergency Management Organisation (NEMO) has urged people not to tamper with or remove equipment used for monitoring the La Soufriere volcano in St Vincent that erupted in April last year, forcing the evacuation of thousands of people.

In a statement posted on its Facebook page, NEMO said that vandals had destroyed equipment at the site at Greiggs last week where a seismic station had been installed by the Soufriere Monitoring Unit to monitor the volcano, where activity has been on a decline with the continued presence of near-surface hot spots, daily seismic activity and persistent degassing.

“The wires to the seismic station were cut and the solar panel removed. This site was established in June 2021 after the explosive eruptions of the volcano. This means that no data is available from this site,” NEMO said.

It said it is “making an urgent plea for members of the public not to tamper with or remove any equipment that is used to monitor activity at the La Soufriere volcano”.

Director of the Seismic Research Centre (SRC) at the St. Augustine campus of the University of the West Indies (UWI), Dr Erouscilla Joseph, said “this station forms part of the improved network for monitoring the La Soufrière volcano.

“Without this equipment, we cannot monitor earthquakes or the volcano effectively. This is a real concern as, given the recent eruptions in 2020-2021, La Soufrière must be closely monitored at all times to ensure public safety,” NEMO said.

NEMO is urging anyone with information on damage to the seismic station to report it to the nearest police station.