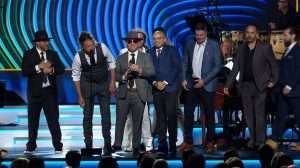 (JAMAICA OBSERVER) – Virginia-based group SOJA has copped the Grammy Award for Best Reggae Album at the 64th ceremony for the coveted music awards.

The group took home the award for the album Beauty in the Silence.

This was the third nomination for SOJA, one of the top-selling reggae acts in North America. Previous nods were for 2017’s Live in Virginia and 2015’s Amid the Noise And The Haste.

On accepting the award, the group thanked their fellow nominees and made homage to the island of Jamaica.

“To the founding fathers of Reggae and the island of Jamaica – you’ve inspired us all. Give thanks, one love.

Beauty in the Silence was released on September 13 by ATO Records. Featuring collaborations with Stick Figure, Slightly Stoopid, Rebelution and Collie Buddz, it peaked at number two on the Billboard Reggae Albums Chart.