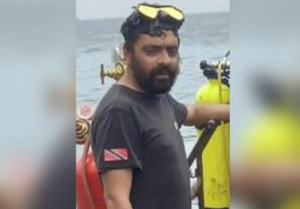 (TRINIDAD EXPRESS) – A private forensic report on deceased diver Kazim Ali junior found that he was alive in the pipeline after being declared dead by Paria Fuel Trading Company Limited, possibly for up to 39 hours.

This according to attorney Gerald Ramdeen who shared the findings of the report at the Hilton hotel, St Ann’s on Thursday.

An incident occurred where they were all sucked into the pipeline and went missing.

Boodram was the lone survivor.

Ramdeen said Ali’s family retained pathologist Hubert Daisley to perform a private forensic autopsy on Ali’s body which found that he died by asphyxia and drowning.

The report, he said, stated that Ali suffered injuries to his leg.

Ramdeen emphasised that Ali was alive in the pipeline when Paria made the determination that the divers were dead and when they prevented any rescue efforts.

“It seems an approximate time of Mr Ali’s death would be some 48 hours, plus or minus, 12 hours before his body was discovered,” he read from the report.

All five divers had gone into the hyperbaric chamber on Friday February 25, 2022.

Ramdeen said the report found that that earliest time of death would be 6 a.m. Saturday (15 hours and 15 minutes after being sucked into the pipeline).

He said the latest time of death was 6 a.m. on Sunday morning (39 hours and 15 minutes after being sucked in).

Ramdeen said Ali and the other divers were inside the 30 inch pipeline, which had air pockets, fighting for their lives.

Paria, he said, left them inside the pipeline to die.

Ramdeen also showed copies of Ali’s death certificates which stated that date of death was February 28, 2022.

Ramdeen also shared a photo of Paria’s whiteboard in their operations room entitled “Log of events”.

The photo showed a timeline of the events on the day of the tragedy.

Ramdeen noted that at 2.45 p.m. persons on barge lost contact with those in the hyperbaric chamber.

He said that one hour and three minutes after, it was concluded the chances of survival are slim.

Ramdeen pointed out that the Board stated that at 15.48 (3.48pm) HSE personnel S. Ramkissoon reported that chances of survival are slim.

Ramdeen said nothing was done by Paria after that.

He said even when lone survivor Chistopher Boodram was rescued from the pipeline on Friday evening and ge said his colleagues were alive, Paria did nothing to rescue the other divers.