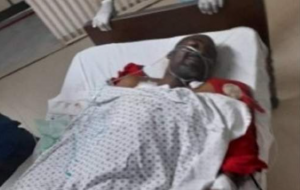 (CMC) – Police in Haiti say they are investigating the attempted murder of Arnel Bélizaire, former deputy of Tabarre, an urban commune located in the Port-au-Prince Arrondissement.

Bélizaire was shot on Wednesday in what law enforcers have dubbed an assassination attempt on the opposition member who had been released from prison last December after being detained for two years following a ruling by the Court of Appeal of Port-au-Prince.

Bélizaire and several others had been arrested in December 2019 on charges of possession of weapons.

The founder of the “Delivrans” Party was the target of unidentified armed individuals in Carrefour Péan, as he took part in demonstrations against insecurity and called for the resignation of Prime Minister Dr Ariel Henry.

Media reports said that Bélizaire was hit at least four times by the gunmen and was rushed to a hospital in the capital.

There has been no official statement regarding his condition, but media reports said he could be flown overseas for treatment.

The Central Directorate of Judicial Police has since opened an investigation into the shooting incident. No motive has yet been established for the incident.