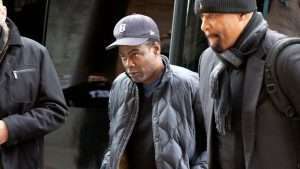 (AP) — Comedian Chris Rock returned to the stage Wednesday for the first time since being slapped by Will Smith at the Oscars, receiving rapturous applause from a Boston audience.

Rock only briefly addressed the slap, saying he was “still kind of processing what happened” Sunday and never mentioning Smith by name.

“Other than the weird thing, life is pretty good,” Rock said at one point mid-way through his act. The nighttime performance in Boston came just three days after Smith struck the comedian for making a joke about his wife, Jada Pinkett Smith.

Rock wore all white for his performance and seemed to be almost embarrassed by the multiple standing ovations he received. As the applause carried on for minutes — with fans yelling “I love you, Chris!” — the comedian appeared to be getting emotional, a guest seated near the stage told The Associated Press.

“How was your weekend?” Rock joked before getting into his set.

Ticket prices skyrocketed after the Oscar confrontation, but the comedian made clear he wasn’t going to talk at length about it Wednesday.

“If you came to hear that, I’m not … I had like a whole show I wrote before this weekend,” Rock said.

Members of the audience shouted their support for the comedian. At least one person yelled that Rock should sue Smith.

At Sunday’s Oscars, Rock had made a joke about Jada Pinkett Smith’s buzzed haircut. Pinkett Smith has spoken publicly about her diagnosis of alopecia, which can cause baldness.

Smith promptly stood up from his seat at the front of the venue and took to the stage, slapping Rock across the face before sitting back down and yelling at Rock to keep his wife’s name out of his mouth.

Wanda Sykes, who co-hosted the Oscars with Amy Schumer and Regina Hall, said she felt physically ill after Smith slapped Rock. In an interview with Ellen DeGeneres scheduled to air April 7, Sykes also said letting Smith stay and accept his award should not have happened.

Several stars rushed to counsel and calm Smith after he returned to his seat, including Denzel Washington, Bradley Cooper and Tyler Perry.

The drama overshadowed some historical wins at an Oscars. The deaf family drama “CODA” became the first film with a largely deaf cast to win best picture. For the first time, a streaming service, Apple TV+, took Hollywood’s top honor, signaling a profound shift in Hollywood and in moviegoing. Wins for Ariana DeBose of “West Side Story,”Troy Kotsur of “CODA” and Jane Campion, director of “The Power of the Dog,” all had made history.