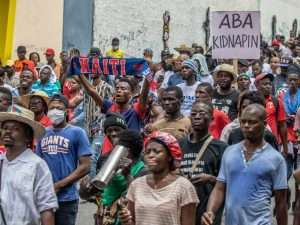 (AFP)— Thousands of people demonstrated Tuesday in Haiti to denounce a surge in kidnappings and the lack of action by the government of Prime Minister Ariel Henry to protect the population from crime gangs.

The Caribbean nation has been under the sway of gangs for months, their influence extending far beyond the poor neighbourhoods of the capital Port-au-Prince that spawned them.

“According to the alerts we receive, I’d say that between five and 10 people are abducted every day, with peaks sometimes of up to 20 a day,” said Marie-Rosy Auguste Ducena, an activist with the National Network for the Defense of Rights humans.

The region around the capital “has become a maze of crime,” she said

“We do not lead a normal life in Port-au-Prince. The people are totally paralysed: it is a reign of fear”, said Jean-Robert Argant, coordinator of the collective December 4, one of the organisations that called for demonstrations.

Making matters even worse, kidnappers sometimes dressed in police uniforms to carry out their crimes.

“Imagine the anguish this creates”, said Argant. “When the honest police want, for example, to carry out searches or checks, citizens tend to flee because they do not know if it is real police or kidnappers disguised as police,” he said.

In Port-au-Prince, a large demonstration wound peacefully through the city for more three hours under police guard, chanting slogans against both the government and the police, whose officers have often been accused of failing to stand up to the armed gangs.

“We are tired of taking bullets, of being kidnapped: we are asking Mr Ariel Henry, since he has proven he is incapable, to step down,” said protester Robens Dorvil.

In Les Cayes, Haiti’s third-largest city, a group of protesters stormed the runway of the airport and torched a small US missionary plane.

“Our team on the ground is safe. We are preparing to bring them back to the US safely,” Florida-based Agape Flights said in a statement, adding that further flights this week had been cancelled.

Local media reported one person was killed and several injured by bullets when police moved against the group that attacked the plane.

Traffic through the airport has increased sharply since June, when gangs took control of the only road linking the southern half of Haiti to the capital Port-au-Prince.