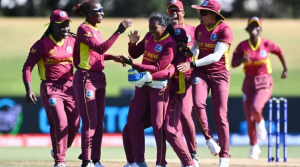 (CMC) — West Indies Women will be without a key part of its bowling attack for their ICC Women’s Cricket World Cup semi-final match on Wednesday after veteran spinner Afy Fletcher tested positive for COVID-19.

The ICC said in a statement early on Tuesday that young all-rounder Mandy Mangru, who travelled with the team as a reserve, has been approved as Fletcher’s replacement when the Caribbean Women go up against six-time champions Australia at the Basin Reserve.

Fletcher is undergoing a period of isolation and the ICC explained that once she has recovered, she would be eligible to return to the squad in the position of the travelling reserve that took her spot as a COVID replacement.

Mangru has played just one One-Day International (ODI) for the West Indies against South Africa in Johannesburg last month in the lead-up to the World Cup.

The 22-year-old scored 15 runs, batting at number six on that occasion, and registered bowling figures of 0/15 from three overs with her handy off-spin.

Up to the time that the ICC announced her as a stand-in for Fletcher, Cricket West Indies had not issued a statement.

However, according to the ICC statement, the use of Mangru as a replacement required the approval of its Event Technical Committee before she could be officially added to the squad.

The experienced Fletcher, who she replaces, has played 58 ODIs for the Caribbean side. She has picked up four wickets from three matches in the Women’s Cricket World Cup so far, with her best haul coming against Bangladesh when she collected 3/29 from 10 overs in Mount Maunganui.

Fletcher returned to professional cricket in January, after a year-long maternity leave.