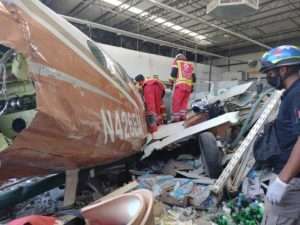 (AP) — A small plane crashed through a wall of a supermarket just south of Mexico City on Monday, killing three people and injuring four.

Officials said the three dead were aboard the King Air twin-engine plane, which has a capacity of about nine passengers. The civil defense office in the state of Morelos did not say whether the inured were passengers or people shopping in the store.

Photos distributed by the office showed the airplane’s fuselage lying amid scattered household goods inside the store in the town of Temixco, on the outskirts of the city of Cuernavaca.

The craft apparently crashed through a cinderblock wall and hit the cleaning products section. Its tail and wings were nearly shorn off.

The FlightAware website said the plane had taken off from the Pacific coast resort of Acapulco.