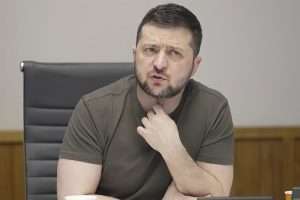 (AP) — Ukraine could declare neutrality, potentially accept a compromise on contested areas in the country’s east, and offer security guarantees to Russia to secure peace “without delay,” President Volodymyr Zelenskyy said ahead of another planned round of talks. But he said only a face-to-face meeting with Russia’s leader could end the war.

While hinting at possible concessions, Zelenskyy also stressed that Ukraine’s priority is ensuring its sovereignty and its “territorial integrity” — preventing Russia from carving up the country, something Ukraine and the West say could now be Moscow’s goal.

“Security guarantees and neutrality, non-nuclear status of our state — we are ready to go for it,” Zelenskyy said in an interview with independent Russian media outlets.

The Ukrainian leader has suggested as much before, but rarely so forcefully, and the latest remarks could create momentum for talks set to resume Tuesday.

Russia has long demanded that Ukraine drop any hope of joining the western NATO alliance, which Moscow sees as a threat.

Zelenskyy has also repeatedly stressed that Ukraine needs security guarantees of its own as part of any deal.

“We must come to an agreement with the president of the Russian Federation, and in order to reach an agreement, he needs to get out of there on his own feet … and come to meet me,” he said in an interview that Russia barred its media from publishing.

Russian Foreign Minister Sergey Lavrov said Monday that the two presidents could meet, but only after the key elements of a potential deal are negotiated.

“The meeting is necessary once we have clarity regarding solutions on all key issues,” Lavrov said in an interview with Serbian media. He accused Ukraine of only wanting to “imitate talks,” but said Russia needed concrete results.

In an overnight video address to his nation, Zelenskyy said Ukraine sought peace “without delay” in talks due to get underway in Istanbul.

While saying “Ukraine’s sovereignty and territorial integrity are beyond doubt,” Zelenskyy also suggested compromise might be possible over “the complex question of Donbas.” With its troops bogged down elsewhere, Moscow recently said its focus is now on securing that eastern region of Ukraine.

Zelenskyy said Ukraine would not try to take back the entire Donbas, which has been the scene of fighting between rebels and Ukrainian forces since 2014, because that would “lead to World War III.”

It was not clear how a compromise would square with maintaining Ukraine’s territorial integrity, and Russia and Ukraine also remain far apart on other issues. Zelenskyy has said any compromises on Donbass or agreement on neutrality must be put to a referendum of Ukrainian voters after Russian troops withdraw, while Moscow wants them sealed in a deal immediately.

— Russia’s invasion has most Americans at least somewhat worried that the US will be drawn directly into the conflict and could be targeted with nuclear weapons, according to a new poll from The Associated Press-NORC Center for Public Affairs Research.

— Germany’s energy minister said Monday that the Group of Seven major economies rejected a Russian demand that some countries pay rubles for its natural gas exports. Economists said that demand appeared designed to try to support the Russian currency, which is under pressure from Western sanctions imposed in the wake of the invasion.

— Ukraine has banned reporting on troop and equipment movements not announced or approved by the military. Journalists who violate the law could face three to eight years in prison. In one case, a Kyiv resident was accused by the security services of posting images on TikTok showing Ukrainian military vehicles near a shopping mall that was later destroyed by a Russian missile strike.

Russian delegates to the Istanbul talks arrived Monday, a day before they are set to start, Turkey’s private DHA news agency reported.

Earlier talks, both by video and in person, have failed to make progress on ending a more than month-old war that has killed thousands and driven more than 10 million Ukrainians from their homes — including almost 4 million from their country.

In the besieged southern port of Mariupol, the mayor said half the pre-war population of more than 400,000 has fled, often under fire, during weeks of shooting and shelling.

Alina Beskrovna, who escaped the city in a convoy of cars and made it across the border to Poland, said desperate people were melting snow for water and cooking on open fires “under shelling and bombs just because if you don’t, you will have nothing to eat.”

“There is no medicine. A lot of people are just, I think, starving to death in their apartments right now with no help,” she said. “It’s a mass murder that’s happening at the hands of the Russians.”

A fiercer than expected Ukrainian resistance — bolstered by weapons from the United States (US) and other Western allies — has been credited with bogging Russian forces down. Russia has resorted to pummeling Ukrainian towns and cities with rockets and artillery in a grinding war.

He said “probably they thought it would be like Crimea,” which Russia annexed in 2014.

“But, here it’s not like in Crimea. We are not happy to see them. Here they suffer and get killed.”

Zelenskyy has nonetheless made increasingly exasperated pleas for Western countries to do more, including sending fighter jets, accusing political leaders on Sunday of lacking courage. Countries from the NATO alliance have been hesitant to give Zelenskyy some of the more powerful equipment he’s begged for, for fear of triggering a much wider war.