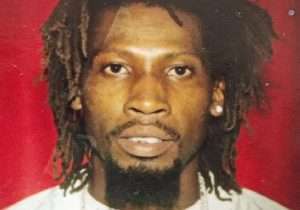 (TRINIDAD EXPRESS) – A 44-year-old man was shot and killed in Moruga on Saturday afternoon surrounded by his friends and family.

The deceased has been identified as Karlun Roberts. He was the father of seven children, ages 17 to three months old.

His wife, Jeraline Cruickshank, told the Express yesterday Roberts was a quiet man and never someone to look for trouble.

Puzzled over the incident, Cruickshank and her mother called for justice so they could find some semblance of closure and move in.

Cruickshank told the Express what she heard on Saturday.

“We don’t know what happened. All we heard was something like firecrackers going off and then we saw blood. Some of the other fellas at the cook were running up the road. That’s when we knew it was gunshots. All we could do was to grab the children and run inside.”

“Karlun’s sister went down the road and saw him lying down next to a drain with a gunshot wound to his head,” she said.

Cruickshank said Roberts worked as a builder at a house opposite their home.

He had just come home to change his clothes and collect something and go back.

The family is heartbroken as Roberts was planning to celebrate his 45th birthday next month.

“He hadn’t decided yet how he wanted to celebrate, but he told me he wanted to do something to mark the occasion, “Cruickshank said.

Her mother said she would give her daughter as much support as she can, but it is a daunting task.

“She has no idea where she stands because the eldest child is writing CXC this year and the youngest is three months. It is very hard on all of us. We just want closure so we could pick up the pieces and move on.”

According to a police report, the small group was making a “cook-up” at the time at Saunders Trace, St Mary’s Village, Moruga. They were also in the company of other persons when a lone gunman alighted from a black Nissan Teanna and began firing at the group. He then fled the scene in the same vehicle, police said.