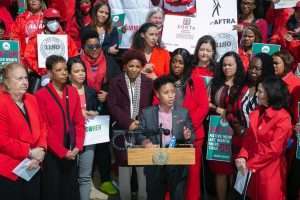 “From fair pay to equal pay, women have been rallying for better and equitable wages for women everywhere,” said Hudson in a message to her constituents.

Hudson, who, in November 2021, made history by being one of the first gay Black women ever elected in New York City, said that despite the symbolic parity, it’s still “less than half the story”.

“For every one dollar a white man earns, a Black woman earns US$0.54 cents and Latinx and Indigenous women earn just US$0.56 cents,” said Hudson, who represents a heavily-populated Caribbean district.

“Our system is broken and women cannot continue to come out year after year making the same demands. We want equal pay now!”

Hudson, whose grandparents are from Jamaica, said it was “amazing to come together with colleagues on the steps of City Hall, for the first in-person press conference in two years and demand equal pay for women”.

“This is about more than equal pay. It is about strengthening our communities, our families, and ensuring every single New Yorker can live with dignity.”

“We are still living in a ‘broken rung’ system, where women do not progress to promotions at the same rate as men — and the pandemic has further rolled back women’s rights in the workplace — and pushed many out of the workforce altogether,” said the representative for the 42nd Assembly District in Brooklyn.

“Indeed, we have a long way to go to achieve true equality. Let us use the momentum to continue to demand equal pay for equal work,” said Bichotte Hermelyn, the daughter of Haitian immigrants.

“To achieve that, we have to prioritise women all year round. We have to pass national paid parental leave policies, increase pay transparency, make childcare affordable for all and expand opportunities and mentorship programs for female entrepreneurs,” she added.