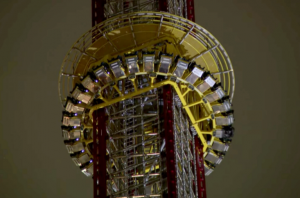 (NEW YORK POST) – A 14-year-old boy died after falling from an amusement park ride in Orlando, according to local reports.

The teenager was on the “Orlando Free-Fall” ride at ICON Park when he fell to his death around 11 p.m. Thursday.

The Orange County Sheriff’s Office confirmed the boy was taken to a nearby hospital, where he died from his injuries.

Witnesses alerted officials after the tragic ordeal when the boy flew off the tower attraction.

Orange County police did not release the identity of the 14-year-old boy.

The “Orlando Free-Fall” opened in December 2021 and claims to be the tallest free-standing drop tower. The ride stands 430 feet tall and can hold up to 30 people.

The ride spins around a gigantic tower after it reaches peak level in the air. Riders are positioned forward with their faces at the ground before dropping at 75 miles per hour from 400 feet up.

An investigation into the tragic incident is ongoing.

In 2020, a worker died while performing maintenance on a different attraction at ICON Park. Jacob Kaminsky fell about 60 feet to his death, according to the Orlando Sentinel. He was 21 years old.