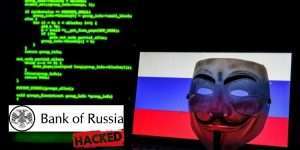 (GIZ CHINA) – The guys from the hacker group Anonymous continue to be a nightmare for the Russian government agencies and foreign companies that have continued to work in Russia. This time they managed to hack into the organization responsible for monetary policy and ensuring the operation of the payment system in the Russian Federation. We are talking about the Central Bank of Russia.

Anonymous announced that the Central Bank had been hacked and promised to release 35,000 files within 48 hours. They had secret agreements at their disposal. In addition, the hackers said that now they continue to work to hack foreign companies that have not left the Russian market.

The Anonymous hacker group has recently hacked a number of Russian and Belarusian media sites, including major publications. The attackers attacked the websites of TASS, Kommersant, Forbes.ru, Znak, Izvestia and other publications. On some of them, hackers posted a statement about the current geopolitical situation, while others simply stopped working.

At the moment, it is reported that in addition to those listed above, RBC, Buro 24/7, Mel, Takie Dela and Fontanka were also among the victims of the attack. In Belarus, Onliner, the website of the state news agency BelTA, and others suffered. The full list of attacked resources is still unknown. Some media outlets have already reopened, while others remain unavailable. We do not know the details of the attack yet.

Earlier, the Anonymous group declared cyber war on the Russian government. The organization planned an attack on Russian information resources, including critical information infrastructure facilities. The FSB called the threat level critical. The other day, Gosuslug websites, as well as government resources, the Kremlin website, and others were subject to hacker attacks.

The Anonymous hacker group has declared cyberwar on the Russian government. The National Coordination Center for Computer Incidents (NCCC), created by the FSB, classified the threat level as “critical”: reports began to arrive about the unstable work of the resources of the Ministry of Defense, as well as the Russian-language and several other sections of the Russia Today news agency website. Failures in the work of the websites of the Kremlin, the government and the Russian parliament took place.

The NCCC published an official statement in which it warned of the intensification of cyber attacks on Russian information resources; including critical information infrastructure (CII). In addition, according to the department, massive cyber attacks from the Russian information space are possible in the near future – such measures aims to create a negative image of Russia in the eyes of the world community, the statement says.